Sometimes you are caught unprepared or overlook small steps in prep, which may set back your cooking significantly.  Sometimes this is fairly innocuous like forgetting to put a bottle of something in the fridge to chill for your guests.  Other times, it is a disastrous oversight such as forgetting to take out a frozen piece of meat to defrost in the morning before leaving for work.  Depending on what the oversight was, you may need a quick and safe way to bring your item to the desired temperature. In the former case you may be thinking simple, put it in the freezer. While in the latter you may also be thinking simple, stick it in the microwave and nuke it. 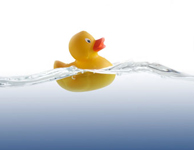 One way to do this, as the name of the article suggests, is by using a water bath.  You can use this as a quick tip, but you can also see it as a continuation of the basic lesson in Cooking with Water, and also as an intro to Cooking Sous Vide.

As we had discussed, liquids, such as water, make great transfer mediums, especially for heat.  Because of this, we can use it to as a contact medium to either chill or warm something up much faster than if we could otherwise without.

Your guests have started to arrive, and you just realized that you forgot to put the second bottle of soda, wine, or champagne in the chiller.  One traditional quick remedy is usually to throw it in the freezer. While this generally works, it is still probably not the fastest way to cool something down. Instead, give it an ice water bath. Take a larger container (like a soup pot), fill it with cold water and ice, and then drop your bottle in (not literally, of course). This will bring your bottle to a chill much faster, and much more safely than having it sit in the freezer.

This doesn’t just work for chilling beverages by the way. I’ve been known to cook soup for example, almost up until basically the last minute before I need to transport it. Once it’s done cooking, I’ll run an ice bath in my sink, and put my soup pot in the bath for as long as I can in order to bring the temperature down in minutes so that I can transfer it to a container for transport to a friend’s place. Stir often to speed the cooling process even more (remember, convection).

The reason why it is more safe, is because anything that contains water will expand as it freezes. Because of this, pressure builds inside your container (particularly a sealed bottle, for example) and this could cause it to explode. While soda bottles should be able to withstand this amount of pressure, I have seen cans and glass bottles (rigid containers) explode due to the build up in pressure. Also, you probably really don’t want a slushie when you’d rather have a drink, and not to mention this might give you a wicked brain freeze.

This method is faster also because the ice is cooling the water (conductor) and the water is making full contact with the container, and the container in turn is chilling your item directly. This is faster than having the freezer chill the air (which needs to be done after you open the freezer), having the air settle on your item, and then having the air cool your container, and subsequently then item. Keep in mind, air – and especially dry air – also has much less mass than water, and as such does not hold its temperature as well so for the majority of the time your item will be warming the air more than the air is cooling your item.

This method of chilling your drinks, food, items, etc. is faster than simply sticking it in the freezer, but keep in mind it also gives you more control. Because it is sitting in a water bath, remember that the water itself is not frozen and so the lowest temperature it gets to is just above freezing. This means, you don’t run the risk of having your drink go way past the freezing point and then now you have to bring it back to thaw it out. This will undoubtedly result in unpleasant separation of liquids due to the different freezing points. In the case of wine, this might result in the separation of the juice, alcohol, and water which can potentially result in a fairly awful bouquet.

Let’s say you have the opposite problem. You have something that is already frozen and it needs to come to temperature before it can be prepared – let’s say either the steak you were planning to make for dinner, a roast, or worse, the thanksgiving turkey! Now you’re in a pinch because you forgot to take it out to thaw and you need to get it done quickly. Conventional thawing suggests that you thaw meats in the refrigerator because the temperature is warmer than freezing so allows for the thawing process, and also cool enough to keep the parts of the food that have already thawed, safe. This, however, does limit the speed of the thawing process significantly. A 12 lb turkey thawing in the refrigerator for example, will take about 2-3 days to finish thawing completely. Tossing the food in the microwave at this point is potentially the worst thing you can do. I’m just going to say right now unequivocally – do not do this.

Instead, you can place your food in a water bath and it should speed up the thawing process usually 8-10x faster. In the case of our friend the Thanksgiving Turkey, the same 12 lbs will thaw in about 6 hours, vs the original 2-3 days.

This is an important note: If you are using this method for raw meats (vs something like frozen soup or stock), the water bath should be changed about every 20-3o minutes, and also be aware that the meat should be cooked almost immediately as soon as it’s been thawed. While changing the water with that frequency practically allows you to exchange the water chilled by the meat with warmer water allowing you to stay on track with the thawing process, it also flushes away any contamination of the water allowing you to keep the conditions as sanitary as possible for the cooking situation. This is a risk of using this method for any meats which require particularly long thawing times. Remember that raw meat which is not refrigerated can allow for the growth of bacteria. As long as you cook your meat thoroughly however, this should not be a concern.

This method, however, is safer than thawing your meat in a microwave. The reason for this is because microwave thawing is inconsistent, uneven, and generally destroys the meat or whatever food you’re defrosting fairly violently. In the case of a steak, you could end up with sections which are well done, next to areas which are still frozen, and the whole steak will generally taste like and have the texture of rubber. While a little raw beef generally isn’t too bad, if this was chicken you would probably regret this decision immensely tomorrow.

The reason why this method is faster, is the same as in the case of chilling your item. Water is making contact with your container, which in turn transfers the heat directly to your food allowing it to come to temperature faster. Again, because of the mass of water vs air, it also retains the desired temperature more effectively.

This ties back to the concerns associated, in contrast, with the microwave method. Because the food is being brought to a specific temperature with fair uniformity, you don’t run the risk of having significant variations in temperature throughout your food. Also, because the water bath is basically a controlled application of heat to a colder body, you don’t risk over cooking it, or risk some parts not achieving the correct temperature – the food will come to the temperature of the water bath.

As a general tip, place whatever item you’re going to be giving a water bath inside an uncompromised plastic bag or some other impermeable container where possible. Again, this is done also when cooking sous vide. This will keep your food and beverages dry while it is coming to the desired temperature – after all, a soaked label on a bottle of wine is not so nice. This also limits the contamination or cross-contamination of fluids, surfaces, foods, etc. via the water medium.

If the bag or other container has been compromised somehow, or even just as a safety precaution particularly with meats, sanitize your water bath container thoroughly after use. Either fill or spray down the container with a 10% bleach solution and let it sit for about 10-15 minutes, rise and wipe, or let air dry depending on what’s most appropriate. Remember, bleach is extremely volatile which means it gives off large amounts of fumes so when you’re working with bleach, make sure you’re working in a well ventilated area.