One of my favorite things to do during the summer is to head out to the yard (yes, I have one … in the city!) and fire up the grill. I’m lucky that our building has one, and not just any ole gas one, but a nice charcoal-burning Weber! Nothing beats having some friends over to hang out, chill out, eat, drink, and be merry. With Labor Day coming up, this weekend will probably be one of the last to really make use of that thing before we pack it in for the summer.

Something I struggle with though, is what to throw on the grill that’s a little more interesting and inventive than the usual sausage, burger, and wings that come from the usual pork, beef, chicken trifecta.  The last BBQ I hosted included some vegetarians, and also was just on the tail end of Ramadan, and of course I wanted to include my Muslim friends in the feast, so I was challenged with figuring out what else to serve that would be a little bit more creative.  Was I successful? Eh … Let’s just say a little more practice will be required!

That said, my friend Karuna of Karuna Naturopathic had just happened to share a Huffpost article on surprising and unexpected things (like fruits and veggies) you can throw on the grill, so check out their list of suggestions here:

If you’re going to grill up water-laden vegetables like the Romaine or Mushrooms, my suggestion is to pat them dry after washing them, and then purge them so they grill instead of steam.  More specifics on this later, but basically you salt liberally with coarse grain salt (like sea salt) for about 2-4 minutes, then rinse off quickly.  This draws the water to the surface, dehydrating them a little and you rinse off the salt before it flavors the food.  Lightly coat with oil, salt, and a dash of pepper, grill and serve.

For the fruit, you can throw them directly on the grill, but I prefer to coat them with a little something to promote caramelization.  In this case, a mixture of brown sugar (or rum), cinnamon, and water.

Another great idea I happened upon (or was reminded of) from another BBQ that my friend Brenda invited me to, was pouch cooking!  I could write a volume on this since I used to do it all the time but don’t know know why I didn’t consider it for the grill!  The idea is simple.  Create a pouch with aluminum foil, stuff with food, seal, cook, eat.  At this cookout, they made pouches with Chinese squash, mushrooms, and ginger, but you can use any combination you want.  It also works great for meats like fish.  Simple, and delicious.

Now for a really crazy suggestion, you can try the all-in-one meal – aka the S’mores Burger!  Invented by my friend Howard at this last BBQ.  He’s actually a very good cook (better than me), but some times his concoctions are not for the faint of heart – albeit always better than those of David Chang’s.  It does look pretty delicious though, doesn’t it? 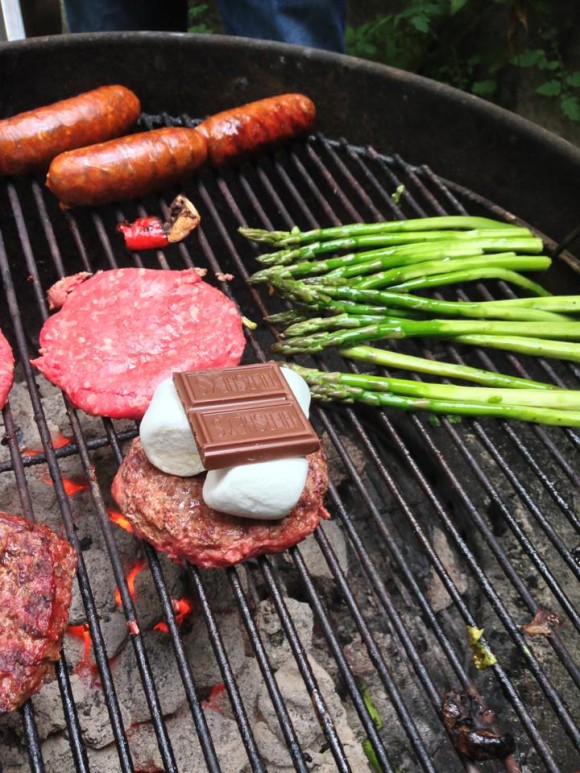 Now that you’ve got the food all figured out, you’re probably wondering what to drink.  Of course you can go for the usual beers, wines, and simple cocktails (rum + fruit + sugar and ice, done), but again if you’re looking for something a little more interesting and refreshing, you can try some smoothies and juices.  For this, I’m going back to my friend Karuna for some great summer smoothie / juice suggestions.  She mixed up a few personal sized batches for a spot she did on Corporate Profile, but these are super easy to scale up for everyone to enjoy and are kid friendly too!  Check out her spot here: