I recently hosted my first big cookout (20 people is big by my current standards).  If you’re considering hosting your own — and you should — and wonder what it’s like, here’s how I got through it. 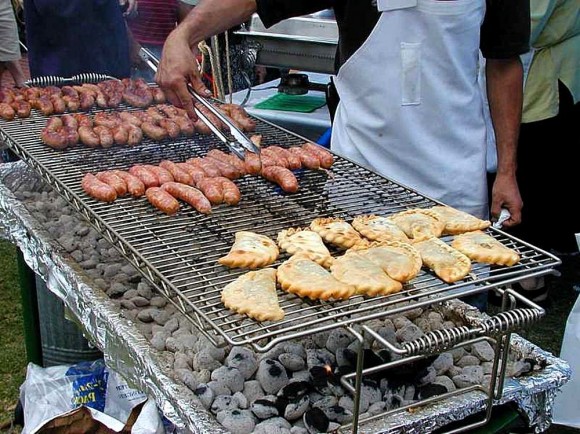 I always start with produce. As soon as my wife and I decided to host the cookout, I knew we’d serve a salad of tomatoes as well as one with corn, based on recent purchases at the farmstand. Later we figured that salads of watermelon and rice would round things out.

You don’t have to be a produce enthusiast to justify working this way. Quality and availability vary by the week. Vegetable- and fruit-based dishes add variety to a menu. They’re also a welcome option once diminishing returns to eating meat set in.

Compared to choosing vegetables, picking proteins was much easier. With at most twenty people coming to the cookout, three proteins seemed enough.
I asked my dad to bring his pork skewers. I thought chicken skewers would be a nice complement. My family expected burgers, so ground beef was the final item on the list.

I found this to be the most difficult and fun step. Some may find cooking to be hardest. It used to be for me. As I gain more experience, I do less crazy things for parties and try new things when cooking weeknight family dinners. I find this the most fun step because anything goes when you’re just planning.

The first thing that made it onto the menu was my dad’s pork skewers. They were sweet and savory without belonging to any specific cuisine (though I think this rules out most Western European cuisines).

So I picked out something complementary: chicken pieces marinated in yogurt, dried sweet and chili peppers, garlic, red wine vinegar, and lemons. The recipe is here. Of the little I know about Middle Eastern cuisine, I wonder if there is an authentic version of this marinade with harissa and preserved lemon. Figuring this out is on my to-do list. Choosing the recipe for the chicken set constraints on the rest of the dishes. I personally don’t mind putting Americanized Chinese food next to baked ziti if that’s what the host serves. I try to be an easy-to-please guest. But when I serve I like to work within a flavor profile, as I’m sure most people do.

The rice dish came soon after, as I knew my relatives and in-laws would be looking for a starch. Dried fruit seemed like a complement to the heat of the skewer, cilantro would provide the high note, and cinnamon would suggest some soft or creamy note to complement the acidity of the yogurt. Fortunately I found a recipe at Bon Appétit that had already worked out the proportions. A time-saver.

On the corn, I thought of Yotam Ottolenghi. He works in Middle Eastern flavors and his cookbook Plenty is fantastic. I found a recipe for a salad of charred corn with lime, red onions, mint, parsley, and cilantro on the Food and Wine website. Corn and charred flavors are cookout classics. I figured the herbs tied in the salad to the skewers and rice. The acid from the limes and sweetness of the corn — the corn was really delicious on its own — helped the salad pop.  Having chosen this corn salad, I felt a salad of watermelon, lime, mint, and feta followed immediately. The watermelon was distinct from the corn because of its feeling more like a “dessert-y” option, but still tied into the other dishes due to the lime and mint. The feta gives body and a creamy counterpoint to the acid.

Still, I ended up with two less harmonious choices: pico de gallo and cheeseburgers. I can live with those choices for the most part. What casual cookout doesn’t have chips? With chips, dip. Pico de gallo seemed an obvious choice because it featured the fresh tomatoes. The lime and cilantro would tie the salsa to the other dishes. I do wonder if I could have tied this in more with the addition of some other element. On the burgers (1.7 parts ground beef to 1 part cooked barley, for healthy bulk and anti-feeling-gross-after-eating assurance), I have two brothers and a brother-in-law. I provided lettuce, sliced tomato, red onion, and a few condiments. I’m sure I could have made a sauce and a cheese like feta to tie the burger in better to the rest of the dishes. Next time!

The biggest problem I faced in planning the cookout was deciding just how much to cook. Dinner at home is easy enough to eyeball by now. But for me there is no eyeballing food for larger groups. I have no idea what a big-enough spread is supposed to look like. Thankfully, there are guides in print and online on how much food per person in ounces we should expect to provide in different catering situations.

I started with this guide and then adjusted the amount upward, thinking we’d be having two meals at the park that day. Though scaling up extra was a mistake (we had a ton of leftovers), I can say the original guidelines I linked to are reasonable. (If you’re wondering, we repurposed the leftovers with my family, who were staying at the house, throughout the weekend.)

For completeness, if a recipe was given in counts like 4 ears of corn or volume like 1 cup of tomatoes, I started by measuring the main ingredient in grams (1 ounce = 454 / 16 grams). Call this number I. Then I figured out how much total meat or salad I needed (number of people times suggested portion size). Call this number T. Then I scaled the rest of the ingredients up by T/I. Of course, this actually overstates the amount you really need to scale up, since the other ingredients may provide a significant amount of mass. I prefer to err on the side of cooking too much than too little — not having enough food is one of the biggest sins of entertaining — and I was a bit short on time to weigh out entire recipes. Again, next time! Lesson learned.

Having formed a concrete and reasonable plan, the actual food shopping and preparation was easy! Cooking at larger scale was easier in some respects than cooking a weeknight dinner. The time spent handling food was much larger than the time spent cleaning. The time spent cleaning, actually, felt like a series of short breaks. If you’re into zoning out while you cook, then you can really get into that here.

I refrigerated food the night before the cookout — I purposely chose cold dishes because it was going to be hot — in the largest version of these containers from Target.  (I can’t find the exact ones on the site.  They’re the wide, short, rectangular ones.)  I wrapped the containers tightly with plastic wrap to prevent spillage during the drive.

I did many things right — I consider the planning, excepting the scaling and the hamburgers, a success — and a few things wrong, specifically, cooking way too much food and starting the cooking too late. Thankfully, the errors can be easily fixed with a little more planning and scheduling. I also know how many slots I need to fill (3 proteins, 4 sides) for next year’s family cookout. This year’s produce choices and recipes, finally, are also a jumping-off point. It’s harder when you’re starting from zero experience.

At this point I’m a full-fledged cookout-o-phile. The same may happen for you! I hope this post is useful for getting there.