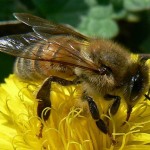 The practice of beekeeping is the harvesting of excess honey produced by the bees which will not be consumed during the winter months. Inherent in this one statement encompasses an incredible number of concepts including by not limited to husbandry, stewardship, symbiotic relationships, agriculture, harvest, etc. but the most important issue I want to highlight here is awareness. Some, but not many or not enough people, have heard about the onset of a silent crisis which will have an incredibly large impact on our world – yes, world – in the next few years, and our very existence quite literally may hang in the balance as the buzzing subsides and the world gets just a little bit more (probably) unnoticeably silent.

Most of what we know about bees is that they produce honey from the nectar of flowers. In addition to nectar from flowers though, bees can take food from other sources which will further change the characteristics of the honey. Honeydew, the sweet secretions of aphids for example, or other plant sap-sucking insects can be used as a food source. Honeydew honey is very dark brown in color, with a rich fragrance of stewed fruit or fig jam and is not sweet like nectar honeys. Germany’s Black Forest is a well-known source of honeydew-based honeys, as well as some regions in Bulgaria and Northern California in the USA. In Greece, pine honey (a type of honeydew honey) constitutes 60-65% of the annual honey production. Honeydew honey is popular in some areas, but in other areas beekeepers have difficulty selling the stronger flavored product. Depending on the food source for producing the honey, it can come in a variety of colors, tastes, and textures, and changes even as it cures in the honeycomb:

Top producers in the world for honey include:

Funny side note – as eluded to above, honey is produced as a food source. The reason why bees can use sources other than nectars is because the raw material used to manufacture honey is processed first. Bees are one of, if not the only animal (generally speaking) other than humans that manually produce food. I bring all of this up to say that the way honey is produced that the food source / raw material is first ingested by the bees at which point certain enzymes are introduced (more on this in another article), and then is regurgitated before being dehydrated.

Back to the bees …

CCD is a phenomenon now occurring worldwide. That’s right, worldwide. In the US alone:

CCD is characterized by the following symptoms in an empty hive:

Why are these characteristics particularly concerning? This is the most interesting part I think about the behavior of bees – that they are very responsible “humanitarians”:

Unhatched young are left abandoned in a hive. Normally, bees of a hive will not abandon a hive until all young are hatched. That’s right, leave no man, woman, or children behind.

Both honey and bee pollen remain. Food stores are typically robbed by other bees, or attacked by hive pests (moths, beetles, etc.). In these cases, the colony doesn’t collapse, nor is it abandoned because it had been compromised and the food stolen, but rather it’s not even pillaged later – indicating that it probably had not been discovered by predators or that there had been no imminent dangers.

Abandoned, by workers and other generations of bees, rather than the hive dying because it is queenless, which is not considered CCD. Again, leave no one behind and the bee society is a matriarchy. Queens may fight, colonies may split if there are multiple queens, but queens are never left behind.

All these symptoms indicate that a hive was vacated due to a collapse, rather than due to abandonment under more natural circumstances. In cases of CCD, typically bees simply disappear – no dead bodies, no trace. Nothing.

The Big Question: “So”, you might be asking, “what’s the big deal” right? I mean, they just make honey. We can learn to live without it. And fewer pests to deal with on your summer picnics.

Unknown to most, bees are probably one of nature’s most hardworking creatures. Wonderfully diligent, incredibly intelligent, amazingly selfless, they give and provide more value than they take, and are the backbone that supports the majority of the biomass of this planet. Bees help to pollinate about 70% of the world’s crops.

That is a staggering number. To put it in context, imagine a statistic I read in passing (but am having difficulty finding now) that every third to fifth bite of food is attributed to bee pollination activity. As they fly from plant to plant, flowers are pollinated giving rise to fruits and flora reproduction.

Without their assistance in pollination, plants would cease being able to reproduce, and eventually begin to die off and crop fields would fail unless another insect arises to take its place, or plant reproduction takes place with significant human intervention. While speculations exist, the exact impact of the extinction of bees is not fully known. Given their importance to the ecosystem in the role they play in sustaining agriculture and other food sources, human survival would probably only last a few years beyond the extinction of the bees.

How or why is this happening? The exact cause for CCD is not currently known. There are many theories, and many speculate either one of many popular causes, or a combination of causes as the possible reason for the disturbing prevalence of the CCD epidemic. Some of these causes include –

Using pathogen screening tools IAPV and was identified with high correlation with hives that had suffered CCD however no strong conclusions have been drawn.

A statistical poll of both amateur and commercial beekeepers attributes the possible cause for CCD to the presents of predatory [Verona] mites (image: right). No strong conclusions have been drawn on this hypothesis either.

All we currently know now, though, is that we have to figure this out – and quickly, or at the rate bee colonies are collapsing, we could begin to starve rather quickly.

* This article is adapted from notes I put together for a class I gave on honey tasting and may contain references to data or information provided by a variety of sources. If you would like acknowledgement or reference to information you may have provided, please contact me and I will include it accordingly.

← Margins for error
“What’s a typical dinner in the Pépin household?” →

2 comments for “A Crisis Worth Buzzing About”